Who is Saayoni Ghosh whose arrest caused a stir at the Union MHA office in Delhi? 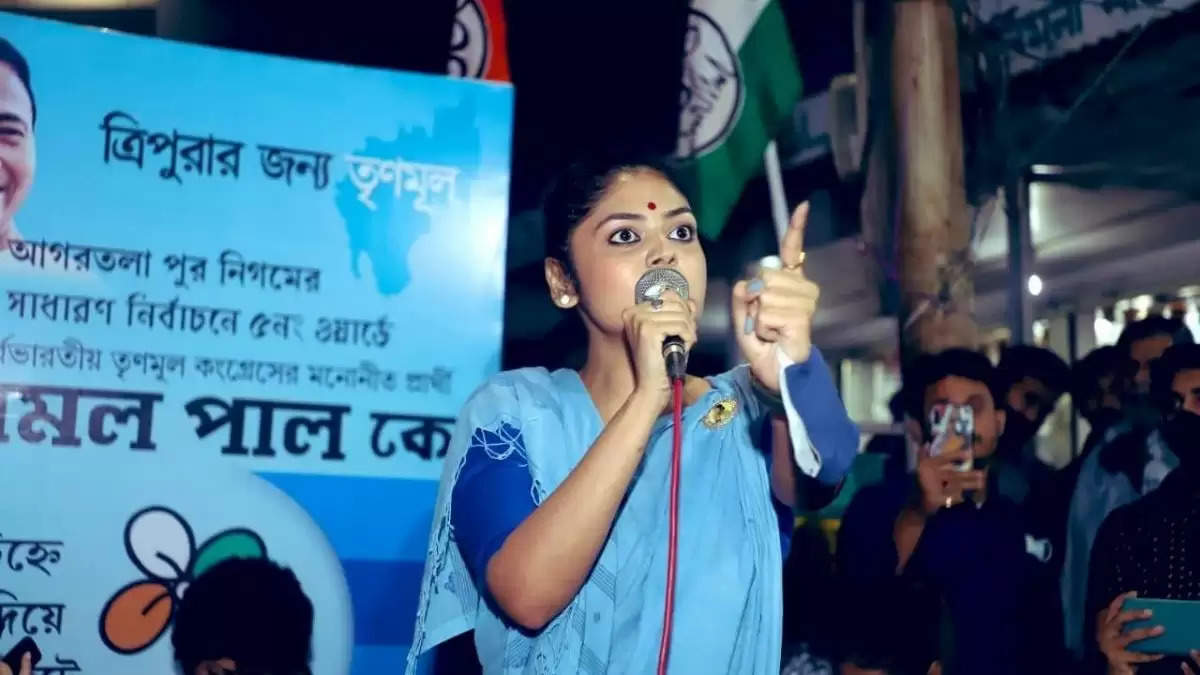 TMC MPs sat on ‘dharna’ in front of Home Minister Shah’s office in Delhi to protest about the violence in Tripura and sudden arrest of Saayoni Ghosh.

TMC’s youth wing president, Saayoni Ghosh, who was arrested on Sunday for ‘attempt to murder’, and ‘promoting enmity among people’, got bail on Monday.

The immediate response from the party, including MPs in Delhi to Abhishek Banerjee taking the first flight out to Agartala clearly, indicates her position in the party. Banerjee reached Agartala to show solidarity with Saayoni, who was campaigning for upcoming civic polls.

Party chief Mamata Banerjee, who flew to Delhi on Monday, said she would protest against Ghosh’s arrest and raise the matter with Prime Minister Modi.

From child artist to street politician

Ghosh broke headlines in January 2021 when former Meghalaya Governor Tathagata Roy accused her of ‘hurting Hindu sentiments’ and filed a complaint against her, tagging a 2015 tweet from her social media page. A separate FIR was also filed against her in Guwahati. In turn, the actor filed a complaint with the cyber cell of the Kolkata Police against online death and rape threats.

The screen-grab of the ‘objectionable’ tweet attached in the police complaint by Roy was a meme of Lord Shiva. Saayoni Ghosh claimed her account was hacked when she wasn’t active on the page. She officially joined TMC on February 25 during a program in the presence of Mamata Banerjee.

Saayoni Ghosh had shifted base to the city after receiving the ticket for Asansol. She lived in a rented house and began establishing contact with the locals. Ghosh would start her campaign as early as seven in the morning to connect with women and youth voters.

The motto of her long campaign was to connect with people. She took chutney recipes from old village women and climbed down to Eastern Coalfields to interact with workers who came from local villages. Mamata called Ghosh a street fighter when she campaigned for her virtually, the tag worn by CM with pride.

However, Saayoni lost the battle to BJP’s Paul by less than 5,000 votes. It was a close fight as Ghosh secured 42.82% share of votes while fashion designer Paul got 45.13%. Despite losing the election, Saayoni took over as president of the Youth Trinamool Congress from Abhishek Banerjee.

This was Saayoni Ghosh’s second visit to Tripura to organise party workers ahead of Abhishek’s first roadshow that was later not allowed. Apart from these, she was holding roadside meetings in the last week with other Trinamool leaders.

Even before Abhishek could set foot in Agartala for the last leg of civic polls campaigning, the state police arrested her on Sunday after summoning her to a police station. She has been booked under sections 153, 153A, 506, 307, and 120B of the Indian Penal Code.

According to the police, Ghosh had allegedly tried to run over BJP workers while driving past CM Biplab Deb’s public meeting on Saturday. She had also allegedly pelted stones at the workers and foulmouthed them. The complaint also claimed that several BJP workers were injured in the chaos, and she shouted Trinamool’s ‘Khela Hobe’ slogan at the BJP workers.

TMC has vigorously denied all the allegations. As per TMC, while Ghosh was being interrogated by the police, the party workers were mercilessly beaten up by BJP goons.

Trinamool’s Lok Sabha MP Sougata Roy said, “Conspiracy to harass a young woman has failed. The due process of law was followed. Saayoni is developing popularity of her own.” Roy was part of the TMC delegation that submitted a memorandum to the Union Home Minister Amit Shah on Tripura violence.