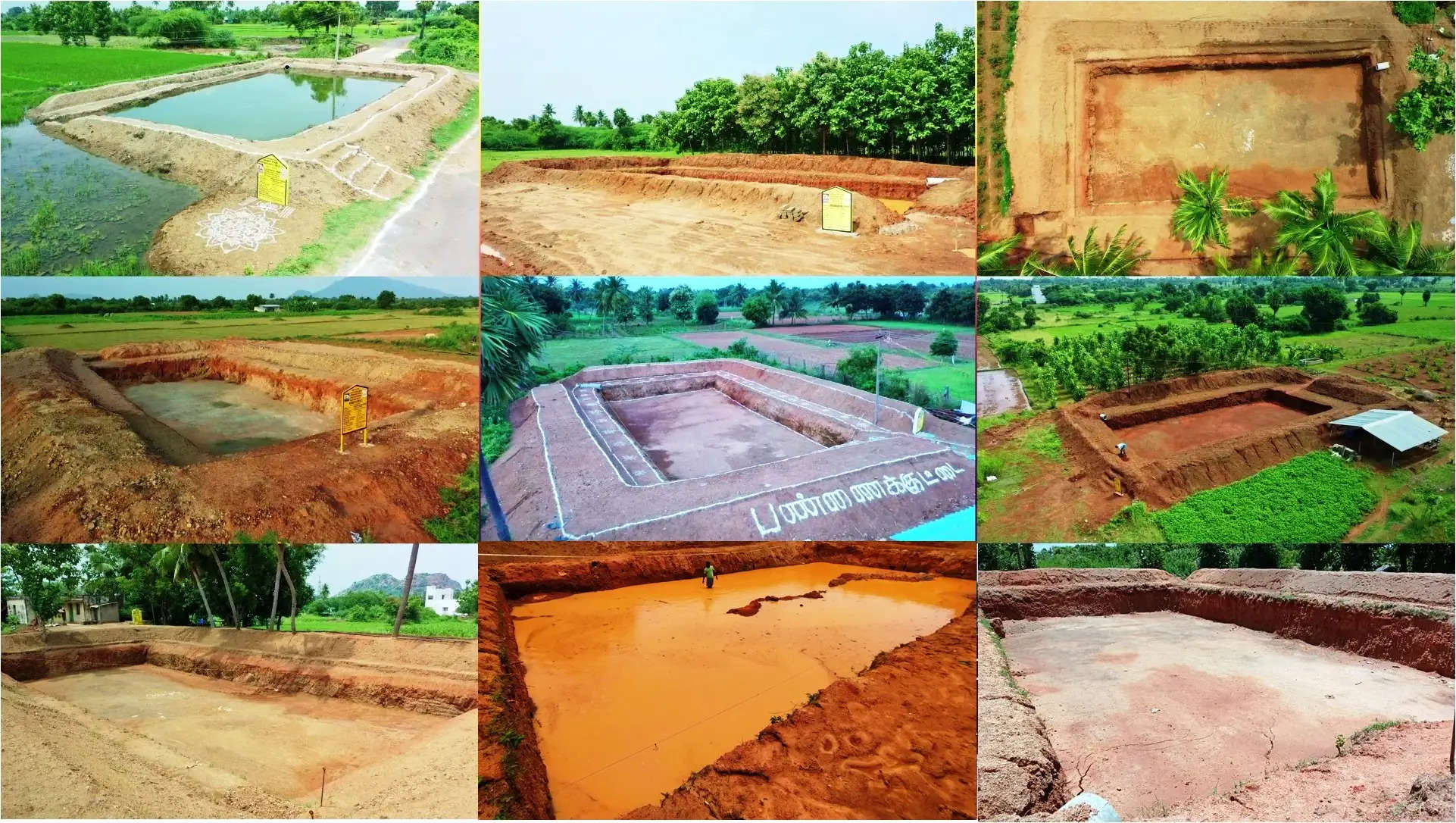 By Digpu News Desk : District Rural Development Agency in Tiruvannamalai district has accomplished a world record in setting up 1118 farm ponds to farmers, workers covered under MGNREGS (Mahatma Gandhi National Rural Employment Guarantee Scheme) got a continuous job for over 30 days to create this farm pond and the district walked into record books in the category “Most Farm Ponds Created at Multiple Locations in 30 Days”. This feat was certified as a world record by Elite World Records, Asian Records Academy, India Records Academy and Tamilian Book of Records.
According to District Collector B.Murugesh, with a sincere commitment to improving the groundwater potential before the onset of Monsoons in Tamil Nadu, we decided to create 1118 Farm Ponds in 541 Village Panchayats of 18 Blocks at a Unit Cost of Rs.1.78 lakhs with a total project cost of Rs.19.96 Crore within 30 days from 12.08.2021 till 10.09.2021 under the MGNREGS (Mahatma Gandhi National Rural Employment Guarantee Act).
The aim behind the initiative was to ensure adequate water for agriculture purposes during the summer and hence a brainstorming session was conducted for the DRDA Team and farmers, which led to the idea of creating farm ponds. Starting with the guidance of PWD Minister EV Velu, the scheme soon caught the attention of many as the work progressed with daily monitoring, he further pointed out.
M.Prathap, Additional Collector (DRDA) added that district like Tiruvannamalai in Tamil Nadu faces severe water inadequacy for agriculture during summer every year, hence we decided to initiate a project to visualize rainwater harvesting which will ensure storage of adequate water for agriculture and also to improve groundwater potential. After a devising session, we decided that the creation of farm ponds at multiple locations in the district will give a permanent solution to this.
"In this context, we had a detailed Micro Level Planning at Block Level and Village Level for Identifying the apt locations for creating the farm ponds, the sites have been strategically selected at all locations which envisage recharge of groundwater as well. Rigorous Meetings and Workshops were conducted to the entire DRDA team and all the stakeholders of the project in order to educate and impart the process of creating the farm ponds. We had a three-level internal verification process to monitor the progress and execution of farm ponds," Mr Prathap, Additional Collector (DRDA) further pointed out.
I along with 10 more adjudicators and third-party ratifying agencies physically inspected 423 farm ponds in Tiruvannamalai District, each farm ponds were minimum of 72 feet in length, 36 feet in breadth and 5 feet in depth. The District administration has adhered to all the norms and regulations set by the world record team. I am sure this project has given an everlasting lively hood for farmers and the general public in the years to come. We are pleased to certify this project as a new world record, said Dr Jawahar Karthikeyan, Ambassador and Senior Adjudicator, Elite World Records.
“Catch the Rain” Project by creating Farm Ponds to envisage rainwater harvesting has given a lot of faith and confidence to farmers, said Dr.A.K.Senthil Kkumar, Ambassador and Senior Adjudicator, Asian Records Academy.
This Visionary Project executed by DRDA Tiruvannamalai District will be an everlasting asset to the people, it will help the standard of living of people and farmers. These farm ponds can also be used as fish ponds which will serve as an ancillary income to farmers and ensure financial stability. We are proud to certify this as a world record, said P.Jeganathan, Associate Editor and Senior Records Manager, India Records Academy.
Farm Ponds had been an integral part of Tamil life. With changes in the cultural and social milieu, they lost their importance. This project has created awareness of the importance of Farm Ponds and rainwater harvesting, said Dr B.Bala Subramanian, Senior Records Manager, Tamilan Book of Records.
23478 MGNREGS Workers have put their continuous efforts for 30 days and endeavoured towards making this marathon project a successful one in such a record time, which will be an everlasting asset to the district, this project has bagged a lot of appreciation on the whole.